This is probably the hardest trip I’ve ever done in my life. I had a chance to work in Emirates Airline that will help me achieve all my dreams. Just after a week of training, I decided that I don’t … Continue reading →

My sister and I had a love and hate relationship back then. We didn’t get along when we were younger. We’ve had our differences, but we’ve learned how to work together very well now.My sister and I booked a flight … Continue reading →

My first out of the country trip was in Japan. I went there three times in Osaka and Nagoya, all during winter and autumn (Jan 2005, Oct 2005 and Nov 2005). Most of my co-workers went to Japan with our … Continue reading →

My first trip as a solo traveler in our country, Philippines; although I’m a joiner on this trip from Travel Factor. I still don’t have the courage to do a solo trip yet plus as a joiner, you meet other … Continue reading →

After transferring work from Subic to Baguio, I thought all places in Northern Luzon are just few hours away from Baguio. So I invited my dear friend Lei to visit me in Baguio and do a quick trip (weekend trip) … Continue reading →

Probably, the island that I will never get tired of going back although I’ve been in this island for four times (4x) already. The first trip was in May 2009, I was a third-wheel…until now lol! It was a trip … Continue reading →

Mt Ulap is a new mountain getting a lot of attention from all hikers – newbie, seasoned hikers or hardcore hikers. You can enjoy the beauty by simply doing a dayhike. This was featured in Lakbay to Love movie of Solenn Heusaff and Dennis Trillo. So before it became congested and to cure my weekend boredom, I joined the hike of Trail Insanity (c/o Rox) and paid Php 500 for this trek inclusive of dinner plus side trip to Baguio. The fee is lower since I’ll just meet them here in Baguio since I live here. It doeszn’t matter if I have no friends on the trek. Travelling solo made me an independent, confident woman and at the same time, it gives me a chance to meet new friends.

I was so excited for this trip to have my instagram worthy photo at the famous Gungal rock. I woke up at 4am and met the group at 4:30 am at Loakan Airport Arc. We had to stop and wait for another participant at PMA. After few minutes, our group is complete and we’re on our way to Mt Ulap. We arrived past 5am at Ampucao National High School where you need to register and get your guide.

We started the hike at 5:30am and ended the hike by noon time traverse to Barangay Sta Fe. As usual, we are last to arrive the peak together with my new friends – Lher, Ruth and Emz. I enjoyed hiking with these three ladies since we always have time for photo op. We enjoyed the view and talk about a lot of things. Just like me and Bim, they met each other and became friends during a trip only. Then they became travel buddies.

Here’s my photo diary for this trek and some important information.

the hills are alive 🙂

Shower Time! for a fresher you 🙂

What do you think about this blog? Leave me a comment or email at roanguerrero@yahoo.com. Thank you! 🙂

Thanks Bim for making our Calaguas trip video! 😘

After being sick for two weeks and not able to join Bim on our Panay Trip, I’m finally feeling better and ready to go back to work. Unfortunately, when I was asking for my “fit to work” clearance from our Company Doctor, she told me wait for another two days. I can just to go work on December 1 (Tuesday) since Nov 30 (Monday) is a holiday. It’s another four days for me  not doing anything at home. Two weeks is already enough so I don’t need this extra four days, boredom is already killing me.

So I browsed the internet, facebook and look for any tours that I can join. Good thing, there’s a trip going to Cagayan Province via Lakbay Backpackers. It’s a Baguio travel agency so it means free ride from Baguio to our destination. Almost all the trips that I joined, meet up place is in Manila so I had to travel down from Baguio to Manila.

I always wanted to visit Cagayan to see Callao Cave and the famous Palaui Island (home for survivor US). Before the trip, the travel agency (May) texted me if we still wanted to proceed with the trip since it’s been raining in Cagayan which means big waves so it’s very hard to go island hopping. She told me that we are divided into three groups: group of friends from Manila, lovebirds from Baguio and solo girl from Baguio (that’s me). I told her that my decision will be based on the big group, if they cancel, then I’ll have to cancel also. Good thing, they decided to push with the trip. 🙂

The itinerary makes me so excited since it’s a three day full of activity – island hopping, trek to lighthouse, beach bumming and church visits. But unfortunately, the itinerary was not followed. Instead of 8hours drive from Manila to Cagayan, it took us 15 hours (arrived 3pm at Sta Ana Cagayan). I think the problem is that we only have one (1) driver, so we need to take lots of breaks/rest… safety first right.

It was raining so it’s not advisable to go to Palaui. Our Day 1 was used for travel and rest at Jotay’s resort. Good thing, they have swimming pool so I just did an underwater pictorial with Chamy and Harold (lovebirds from Baguio). We also went to see their market and bought some goodies for our island hopping  tomorrow.

After breakfast, it is now time to go island hopping. I’ve visited different islands – in and out of our country, but the boat ride to Palaui is the most scariest ride that I’ve ever did.

I’m glad that we made it alive! Thanks to our expert boatmen. 🙂

It took us an hour to reach our first destination: Anguib Beach. It has fine sands and blue water. As always, took lots of pictures and enjoyed the beach.

Another one hour boat ride to our next destination: Palaui Island where we trek to Cape Engano Lighthouse.

after an hour trek…finally reached the lighthouse

Chamy and I wanted to see the hidden falls but the other big group doesn’t want to, so we moved to our next stop: Crododile Island.

can you spot the crocs? 🙂

After island hopping, it’s time to eat our late lunch at Nangaramoan Beach. We were surprised that we will be sleeping in one small room with no private toilet at Mar-pe’s Lodging and Cottages (Phone#09174767041). It’s not acceptable for a group of 10 people to sleep in a small room. So we decided to pay an added fee so we can have our private room. I think I added Php 600 pesos since it’s only the three (3) of us in our room – Chamy and her bf Harold; and me. Our coordinator Tosz and driver Roger slept inside the van only.

It was agreed that we will leave the beach early so we can complete our remaining itinerary, but the big group was late so we left an hour late against our original plan.

We ate our breakfast first at Dodie’s Panciteria. This was featured by Rated K already for their famous pansit batil patung.

Then off to Callao Cave – yippee! This famous cave was featured on the movie of John Lloyd Cruz and Bea Alonzo “The Mistress” wedding scene. Our guide told us that you can use this as venue for weddings. You just need to decorate it and pay Php 20 entrance fee for each guest. I was also surprised that this is not the only attraction on this cave. It has seven chambers but you can only go up to the 5th chamber. Here you will see different rock formations.

after 184 steps, we reached the entrance to the Callao Cave

say a little prayer for you 🙂

There’s so much more to do within Callao Cave like boating to falls. But due to time constraint, after spelunking, we went to visit the Basilica Minore of Our Lady of Piat.

During lunch time, Tosz found out that we already pass the other church. We had to go back to Sta Ana again to see it. But the team decided that we will just travel back to Manila since it’s gonna be another 13-15hours. It’s sad that I won’t be able to see the other churches but at least I was able to see one. It’s enough for me for this trip.

They need to drop the Manila peep first before going back to Baguio. So that means, I might be late for my work. Chamy and I decided to take a bus going to Baguio. We arrived in Tarlac at 3am and arrived in Baguio 6am. After power nap, I’m ready for work.

What do you think about this blog? Leave me a comment or email at roanguerrero@yahoo.com. Thank you! 🙂

While browsing Facebook, I saw a post of Vagabond Pinas offering a trek to Tinipak River with side trip at Pillilia Windmills. Bim and I saw the windmills but never had a chance to see it up close during our Rizal … Continue reading → 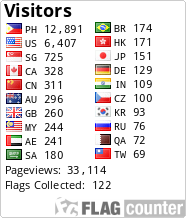